I never said this was going to be an all-gaming blog, did I? Made these meatball-type vegan thingies for a birthday party a few days ago, turned out more than decent. Reckoned I’d share the recipe (which means, what I made up on the fly, more or less). To top it off, I’m adding a traditional german pasta salad (vegan version).

But first, just as an aside: Is it ironic that when I was shopping for the vegan stuff for this recipe, I also bought a carnivorous plant? Didn’t buy it as a silly joke, we really need this thing to deal with our fruit flies.

It’s seitan and spices, really. Good stuff though. They’re meant to be snacked as they are, not as a part of an italian style tomato sauce or something. I was making pretty exhaustive use of all of our little powders and what-not, so the ingredient list is rather long. I tend to do that when I’m improvising. So for the dough (for about 20 balls) I used:

The odd measures for the seitan and the water are because of slight corrections I had to make during the preparation. Later on on you’ll also need

Preparing the dough: Just mix all the dry ingredients (from seitan to cayenne pepper) in a large enough bowl, properly blend all the liquid stuff (from miso to water) and after that just combine dry and liquid and knead until you get something that roughly resembles a yeast dough, just more rubbery. Then smash up all the beans and fold that mash into the mixture.

Next pour oil in a pan (or two pans), not so much that you’ll deep fry the meatballs but slightly more than is healthy, and put the balls in the pan. Now roll them around so that they get completely covered in oil and put the pan on low heat. Fry them on low heat, turning them repeatedly, until they’re golden brown and crisp on all sides. 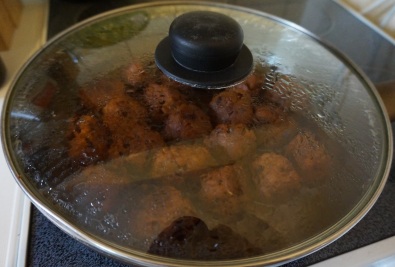 Now combine the barbeque sauce and the quarter cup water and pour that in the pan, toss the balls around in there to cover them completely with the sauce. At last just put a lid on the pan and turn off the heat and let it rest until the balls have absorbed all the liquid. Done. If you find the meat balls to be too mushy, just put the open pan in an oven on low heat, while you prepare the 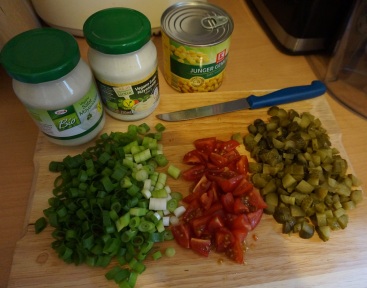 This is easy … barely even a recipe really. Cook about a pound of pasta, as a metric german I had 500 gram. Then cut up 3 spring onions, a bunch of gherkins (7 or so), some cherry tomatoes (I don’t know … 6?). When the pasta is ready, wash it under cold water (it cools it up and prevents the pasta from getting sticky and gooey).

Now just throw it all together, add corn (cooked and canned, like in the picture) and vegan mayo (I used 500 ml, which was a tad much). Finish with parsley, salt and black pepper. Important little trick: Put in some tablespoons of the liquid from the pickled cucumbers. 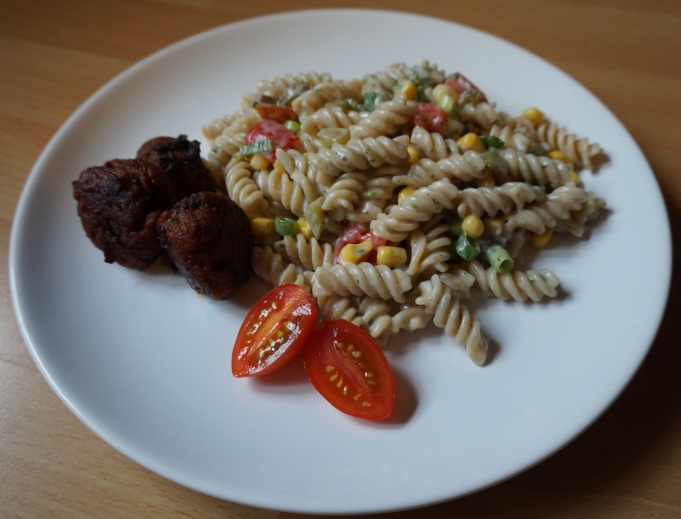